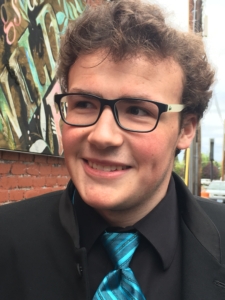 Cathal was born with an H-type fistula (the trachea and esophagus were fused) and had surgery to repair this defect when he was two days old. His “mito story” really begins at 18 months old, presenting with an unusually large liver. After a year and many tests, there was no clear cause for his abnormal liver function and slow physical development.

Cathal was eventually diagnosed with a specific mitochondrial disease, isolated complex III deficiency. We finally had an answer to Cathal’s problems and his mito supplement protocol began. Our family moved from Dublin Ireland to Boston, MA in 2001 and then relocated in 2004 to Bend, Oregon. Cathal has been under the care of Dr. Cary Harding at the OHSU in Portland.

In June Cathal graduated from high school. He continued to play water polo and ultimate Frisbee. We never in our wildest imagination expected him to achieve so much given his early health struggles. He’s not the best player but he gives it his all, like everything else he does. He’s as beautiful on the inside, an amazing person and full of fun. Cathal entered DePaul University this September intending to pursue a film and television major. He has ambitions to create a documentary film about mitochondrial disease, its impact and research for treatments. He intends to keep up his water polo and ultimate frisbee activities and explore Chicago, his college home city. He is focusing on being independent despite his challenges. Cathal has been lucky with his mito condition and appreciates what he has been able to do. He has been so grateful for the Research Guild, the UMDF, his teachers and his IEP staff who have supported his academic goals. He also greatly appreciates the motivation provided by his sports coaches. He couldn’t have done it without his brothers, parents and extended family and the continuous encouragement and love he has received as he starts a new and exciting chapter of life. I’d be pleased for him to take a role someday in advocating for others with Mito who are less fortunate. He is a brave and beautiful person.

Mitochondrial disease is never very far from our minds. Cathal’s younger brother, Eoin, had liver issues this year. Our first concern was that he too might have a mito condition. But we believe his problems were related to an autoimmune response to minocycline. Eoin had us all very worried for a while but he pulled through. No obvious signs of mitochondrial disorder. Cathal’s elder brother, Fintan, is now working at the University of Oregon in mitochondrial research as an undergraduate intern with Dr. Mike Marusich. He is looking at post graduate research opportunities and considering the University of Washington.

We are acutely aware of the need to continue the research focus to find a cure for mitochondrial disease. We are grateful for the work of the Mitochondrial Research Guild and Seattle Children’s Hospital. We wish Dr. Saneto and our Mito Research Guild friends the very best.