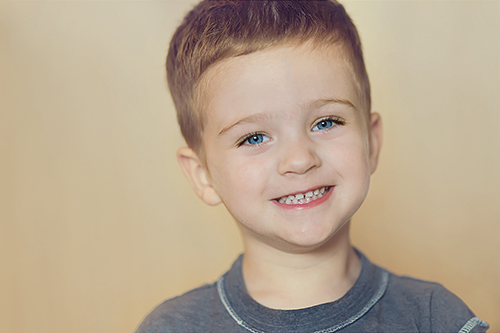 Caylum made his big debut on April 7th 2011 at 11:59pm, exactly one minute before his twin sister. They may be the luckiest of twins, because the minute difference gave them each their own special birthdates! For the first nine months of life Caylum and his sister met all developmental milestones on time or ahead of schedule. At seven months of age we introduced solid foods and started to transition from a diet of exclusively breast milk. Caylum started to have severe, intense, chronic constipation, fall in growth percentiles and no longer had the energy to actively play through the day. By a year old, he was very small for his age and was significantly behind on meeting his developmental milestones. He would spend most of the day either sleeping or laying around on the play mat.  We started physical therapy and began to investigate the cause of his delays.

Over the next year Calum was diagnosed with a chromosomal abnormality that causes severe bone age delay, hypotonia, mild enlargement of his right kidney, gross motor skill delays, speech delays and dysautonomia.

Even though we thought we had a cause for Caylum’s problems, he continued to develop new and unusual symptoms that we just couldn’t explain. He had episodes of very low core body temps lasting over a week, he seemed to get sick more often and more severely than his sister, he would go months without gaining weight even though he ate 1500-1700 calories a day. His oral skills regressed and he began to rely on liquid nutrition, struggled with solid foods, fatigued very easily and would often sleep sixteen or more hours a day.

We pushed for a referral to a neurologist at Seattle Children’s. In March of 2013 we were fortunate enough to be scheduled to see Dr. Russell Saneto. He diagnosed Caylum with a suspected mitochondrial disorder. We were given wealth of information and support, and an emergency drug protocol was ordered for Caylum.

Just five weeks after his suspected diagnosis, Caylum became rapidly dehydrated overnight and we ended up in the ICU of our local hospital. Because of the incredible team work between Dr. Saneto and our pediatrician Dr. Fish, the medication Caylum needed for his protocol had arrived just one week before he was admitted to the ICU! Caylum has responded well to his protocol and in June 2013 had a g-tube placed to supplement his nutrition. Since the g-tube placement he has already gained 6 pounds and has finally started to grow!

We now have a better understanding of how to help our son, prevent brown-outs and give him the best possible opportunity to grow. This disorder seems to change and evolve in our son constantly, always presenting new symptoms. We are so incredibly humbled and grateful for the incredible team at Seattle Children’s, our local doctors at Acorn Pediatric and the amazing work of the Mitochondrial Research Guild.  It has given us the opportunity to give our son the best care possible and an understanding of how to give him the greatest chance for the future.