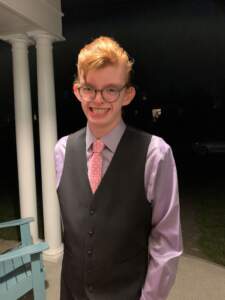 This fall Henry will be a Junior in high school.  He continues to be up for anything and willing to try something new.  Independence is particularly important to him and he regularly teaches us that he can accomplish things in his own way and on his own time.  He is a lesson in how to face a challenge and continue to persevere.   While his main passion is video games, he can tear himself away from a screen now and then.  He is passionate about fairness for all and devours news of progressive politics daily.

Henry is involved in acting, Boy Scouts and community orchestra where he plays the cello.    Henry was part of the Homecoming Court in the fall of his Sophomore year.  He faces the trials of high school with continued optimism and a sunny disposition.  We look forward to his continued progress and development; Henry has taught us to be confident in the future, even if it looks different than what we may have planned when he was a baby.  We attribute this optimism to his steady development, his indomitable spirit and the great care he receives at Seattle Children’s. 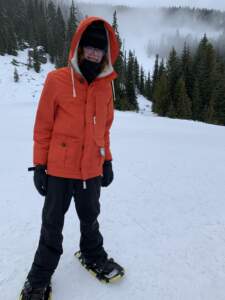 weakness and gastrointestinal problems.  After diagnosing Henry with a mitochondrial gene defect, he assured us that he would work with us to make sure that Henry meets his fullest potential.  Despite that initial assurance, there have been times over the course of this journey that we didn’t know what that fullest potential would look like or if it could ever truly be realized.

Often a doctor’s appointment or therapist visit would have us in a “funk” with worry about what the days to come would hold and the unfairness of it all.  But over the course of time we’ve realized that we don’t have the luxury of wallowing in sadness about the hand our boy has been dealt.  And indeed, that is never how Henry approaches his challenges.  While he may not be the fastest runner on the playground or the quickest kid in the gym, Henry has a BIG personality that is energetic and full of optimism. Because of his great attitude about taking on each new day and the care and encouragement from the doctors at Children’s, we know that Henry does have tremendous potential and that he truly is on the road to reaching it.

We are so thankful to everyone at the guild who has worked so hard to create this community of doctors and families for the benefit of Henry and all Mito kids.