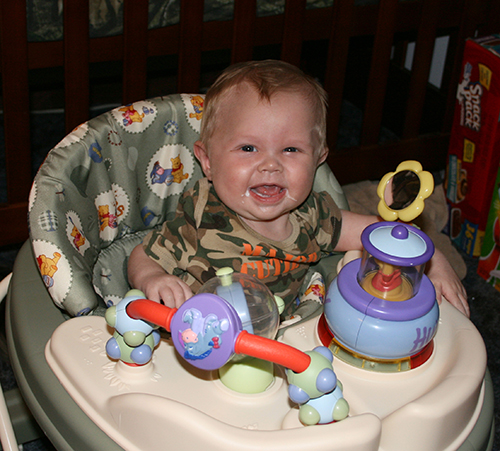 The day Hunter was born; he immediately became the love of our lives. We thought he was a normal baby, just developing a little slower than most. In June, 2008 we learned that something major was wrong with Hunter. We were in two different hospitals in one week before we were finally sent to Seattle Children’s as Hunter’s liver began to fail.

Over a three month period, Hunter endured three liver biopsies, a skin punch graft and a muscle biopsy. In October of 2008 Hunter began to go downhill. He wouldn’t eat or drink, so we took him to our local hospital. He finally did eat and we were sent home. The next day he was fussy again, and we drove him to another hospital an hour away. We pressed for them to call Children’s who ordered more blood tests. When Children’s received the results of the tests, Hunter was flown by Medstar to Children’s, where we learned the name of Hunter’s horrible disease – Mitochondrial DNA Depletion Syndrome. Hunter’s liver was failing at a rapid rate, and his only hope was a liver transplant. He would only be a candidate if the disease had not already affected his brain. Unfortunately, it had. The neurologists said it was as if Hunter’s brain had never developed, when only a week before, he had finally said “Mama.”

The disease ravaged Hunter’s body at a fast pace, and on November 26, 2008, we lost our handsome man.

We are eternally thankful for Children’s and the amazing care Hunter received. The doctors and staff became our family, cared for our boy and mourned right along with us when we lost our son. We need to find a cure for this disease so that other families never have to know the pain of losing a child. Please support Seattle Children’s and the Mitochondrial Research Guild and “Give Kids the Energy to Dream!”