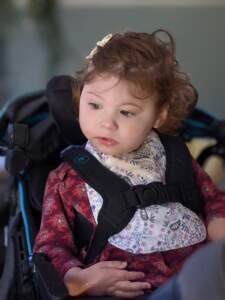 After a stressful pregnancy of abnormal ultrasounds and inconclusive tests, Ivy Ohlgren was born in October 2018. We knew there was a small chance her structural brain differences might be caused by a serious diagnosis, but the more likely scenario, we were told, was that she would be just fine.

Unfortunately, it because clear within the first few days of her life that Ivy was not fine. She was admitted to Seattle Children’s Hospital at 4 days old for failure to thrive, and immediately began testing for genetic conditions. We were incredibly lucky to have a team on Ivy’s side that not only knew what to look for, but took care of our whole family through the devastating process. 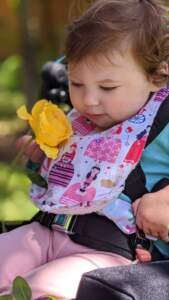 presentation was quite severe. In addition to concerning lab work, she wasn’t gaining weight, was lethargic and always sleeping, was constantly vomiting, and wasn’t progressing with any newborn or infant milestones. She would randomly stop breathing, and began experiencing short seizures. She was not expected make it to her first birthday.

Ivy was immediately put on a ketogenic diet and a cocktail of vitamins that Dr. Saneto and the rest of her team had seen success with in their other PDH patients. They advised us that keeping her healthy and protecting her energy use was of utmost importance. If it were not for their intimate knowledge and experience with mitochondrial disease, this type of care would surely have been delayed, and Ivy’s outcome may have been very different. The effects were noticeable within weeks. Ivy began to “wake up”, gain weight, and show slow signs of increased strength and endurance.

After reaching the milestone of her 1st birthday Ivy had an MRI of her brain to assess her disease progression. As Dr. Saneto described it, the ball is rolling downhill, as expected, but the slope is so much more mild than it was a year ago, and the cliff isn’t in sight. 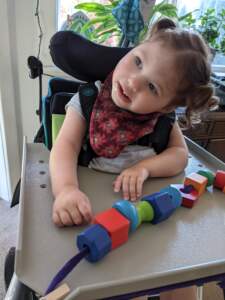 We know that Ivy’s condition can change at any time, particularly if she experiences any common illness, like a cold or flu. But the child we now parent could not be more different from the baby we struggled to keep alive. She is happy, energetic, has interests, preferences and a strong voice. She is still globally delayed, non-mobile, non-verbal, vision impaired, and g-tube fed. But Ivy’s disease presentation is not Ivy. She is a feisty almost 3 year old who loves to be outside, always wants to be moving, and absolutely beams with smiles when she’s sung to.

Ivy recently began a drug trial (DCA) with Dr. Saneto and we are so hopeful that with this addition, her progression will only continue, and her life possibilities will only grow. Our goal for Ivy is to have her sit up or roll over on her own by her 3rd birthday in October. Dr. Saneto tells us that speaking and independent mobility are not out of the realm of possibilities in her future. By the time she turns 4, who knows what new goals we’ll be setting, and what new possibilities will have opened up for her. The research and science that Seattle Children’s is a part of give us hope, and allows us to remain optimistic that even if live changing advances don’t happen in Ivy’s time, that they WILL happen.