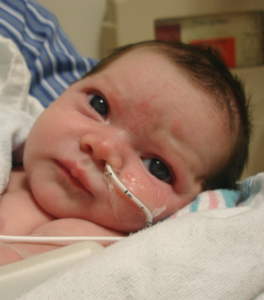 When our beautiful daughter Kate was born, it was immediately clear that she wasn’t well.  She suffered a seizure a few minutes after birth and was admitted to the neonatal intensive care unit at Valley Medical Center in Kent.  Kate underwent eleven days of extensive testing at Valley to try and discover the case of her continuing seizures.  With no answers, Kate was transferred to Children’s Hospital where she became a patient of Dr. Saneto.

Twenty six more days of testing of all types yielded puzzling and inconclusive results.  She finally came home at 37 days old, but continued to have intractable and progressively more severe seizures.

At three months old, Kate was admitted again to Children’s to begin the Ketogenic diet.  During her stay, skin and muscle biopsies were taken and sent to labs on the east coast, due to lack of facilities to do the tests in Seattle. Every day we had with Kate that summer is indelibly etched in our hearts.  But on November 15th, after nearly three months of waiting, we got the test results back.  Kate was diagnosed with a mitochondrial abnormality, the precise nature of which raised more questions than answers. Dr. Saneto wanted to do further tests to clarify the results. But further testing wouldn’t be possible for Kate.  The day after we received the test results, Kate suffered a cardiac arrest.  On November 20, 2006 at the tender age of seven and a half months, Kate died.

It is impossible to say that if we’d had an earlier or more definitive diagnosis, things might have been different for our precious daughter.  It is, however, our firm belief that additional research in the new science of mitochondrial disease will help other children like Kate live longer healthier lives.