Logan had pretty typical development in his early years. Other than being small in stature for his age, he met all of his milestones on time. At around 5 ½ years old, Logan started showing signs of abnormally poor coordination. This led to a total of 5 MRIs, each 6 months apart, all showing bright spots in various parts of his brain but most notably the cerebellum. Both Logan and the bright spots remained stable until May 2013.

The final MRI was done because Logan had run into a doorknob at school and we though he had a concussion. His gross and fine motor skills had began quickly regressing. Within 6 weeks he could no longer walk independently and his speech became very slow. In hindsight, the regression was triggered by a high fever illness that he had the week before. The MRI showed a change in the bright spots. This was the 2nd neurologist to suspect Leigh’s Syndrome and at this point he told us to enjoy each day because we didn’t know how many good days he had left. Worse day ever for our family! 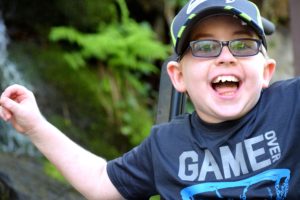 Shortly after, Logan began genetic testing to find out if there was any mutations in his DNA. After months of waiting for results, it was confirmed that Logan had 2 mutations on his SURF1 gene and the confirmed diagnosis of Leigh’s Syndrome. In September 2013, Logan began the screening tests for the EPI-743 study. This was also the first time we met Dr. Saneto. We could not believe how lucky we were to have Logan be seen by one of the best doctors in the field. The study began as a double blind study so none of us knew whether Logan was even on the medication or a placebo. We felt lucky anyway knowing that at the end of 6 months, he would be on the drug no matter what.

It has been over 5 years since he began EPI-743 (we feel like he was on it all along). Logan’s speech has improved to only slightly slower than average, and he can walk short distances with his gait walker and orthotics, although he does use his wheelchair most of the time. His energy levels are much better as well and we have found the fatigue is the biggest issue when Logan is also fighting a cold. Because of how quickly his regression happened, we aren’t sure if Logan would even be around today without EPI-743.

He is beginning High School in public school and we anticipate he will manage the year with full days again with the majority of his time in general education. There are still days that we learn about being a mito family… the unusual breathing patterns, protecting his energy levels to avoid extreme fatigue, or thickening liquids to avoid airway aspirations. But because Logan has always handled this illness in stride, he teaches everyone else to as well.

In his free time, Logan loves to swim, bounce on a trampoline and his favorite of all… play video games with his friends. He is a true inspiration and hero to anyone that meets him. Because of the unpredictability of Leigh’s Syndrome, we don’t know what the future holds but because of EPI-743 and Logan’s bright, positive attitude, we are confident that there will be many great days. Our family is so incredibly grateful to the doctors, researchers and all contributors that made EPI-743 possible and that continue to have the same passion for finding a cure.