When our daughter Mariah was born, we were overjoyed to welcome her into our family of three “big brothers.” When she was about six, we noticed that one of her eyes was beginning to cross.  Mariah had an MRI, with normal results, although her ophthalmologist found she had almost no vision in her left eye. A follow-up MRI a year later showed abnormal lesions on her brain. Within two years, Mariah was having digestive problems, and then her seizures began.

Tests and a muscle biopsy led to a diagnosis of Mitochondria Complex 1 Deficiency.  Mariah missed more and more school and began to be hospitalized for short periods of time.  She began to have “mito crashes.”  Similar to “hibernation,” her body shut down for long periods of time, sometimes 2-3 weeks. Mariah had one crash that lasted 9 weeks.  The crashes took a physical toll on  her  body.   She lost her balance and much of the muscle tone in her feet and ankles and began to use a wheelchair.  Her fine motor skills, swallowing and speech were also impaired. 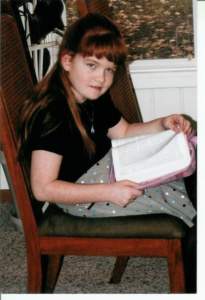 Mariah was treated with the “vitamin cocktail” which helped give her energy, but much remained unknown about her condition. When she was well, Mariah was quite a character, joking with everyone.  She especially loved to tease her brothers. Mariah loved being outside, swimming, church activities and was a great speller. With help and support, she completed seventh grade.  She was such a blessing to our family!

On July 7, 2009, the toll mitochondrial disease was taking on her body became too much and Mariah passed away at her family’s home.  She was 13 years old. Her loss is profound, and she is mourned by all who loved her. Thank you to Dr. Saneto and his staff for all they did for Mariah and for having such a big heart for these “Mito Kids.”