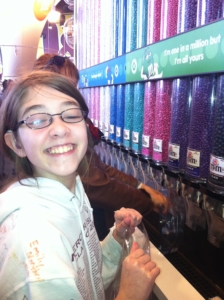 Megan was born in September 1998. At age two, she started having occasional but severe headaches. These headaches would last for a day or more, but no one had any idea why this was happening. When she was five, Megan was diagnosed with Type 1 diabetes. Managing Type 1 diabetes was a 24/7 task for Megan, but we never imagined what was coming next.

In 2009 Megan’s ophthalmologist noticed that her eyes were puffy and her eyelids were a bit droopy. Megan also failed a hearing screen at school. Our ophthalmologist was convinced that all these symptoms were not a coincidence and asked for more testing.

After 8 long weeks of waiting, the results of Megan’s blood work confirmed a diagnosis of Kearn-Sayre Syndrome. It is a condition caused by abnormalities in mitochondrial DNA. This condition is very rare. From what we can find, Megan is one of only a few hundred people in the world who have KSS. KSS is progressive, can impact most of the organs and tissues of the body and has no cure.   Limitation of eye movements, hearing loss and heart issues are common. We had an answer that explained Megan’s symptoms, but nothing but questions about her future.

Shortly after finding out about KSS, Megan rapidly developed a heart condition requiring a pacemaker, which was placed at Seattle Children’s in February, 2010. Because KSS has a very high risk for serious complications from anesthesia, we were terrified, but everything went well.

Two years ago Megan’s pediatrician noticed that she had developed scoliosis caused by weakening muscles in her spine. In just a few months, this progressed from mild to severe requiring major surgery last summer to fuse her spine and insert rods. We take comfort in knowing that the team at Seattle Children’s had the skill needed to manage Megan’s mitochondrial disease before, during and after this major surgery.

KSS caused Megan to lose most of her hearing. She learned sign language and has the aid of a wonderful sign language interpreter at school. Megan works hard to communicate but no one at her school knows sign language. We often had to remind teachers that it is exhausting work for Megan to keep up in class. Last November Megan had a cochlear implant and she is learning to hear again. It’s a lot of very hard work! Megan will also need surgery on her eyelids soon. Progressive weakness in the muscles of her eyes means that Megan can only open her eyelids half way and has trouble doing that when she is tired.

Megan has dreams of studying drama and becoming a world famous actress! Along with her amazing team Seattle Children’s, we will do whatever we can to help Megan realize her dreams and deal with KSS. It’s so comforting to know that while there’s no cure for KSS there is hope!