Samantha came into my life at two days old through adoption. I knew right away there was something wrong. In her first weeks, she had infections and developed severe hypertonicity with constant muscle jerking. She had reflux that caused her to silently aspirate, causing respiratory infections.  We were referred to the Neurology clinic and Dr. Saneto at this time for an EEG and an MRI.  The tests showed nothing definitive.  Sammy continued to have significant developmental delays, so it was back to Seattle Children’s for workups in the nephrology, metabolic and pulmonary clinics.  All the results were still negative until Dr. Saneto repeated the MRI, which led to a muscle biopsy and the discovery of a mitochondrial cytopathy.  At last we had a diagnosis but no cure. Sammy was started on the mito cocktail and has made a lot of progress. We have done genetic testing but still no discovery of a gene producing diagnosis and were even seen at the National Institute of Health to try and get into a study; sadly they were unable to add us to the test pool.

By the age of 9 Sammy had professing muscle weakness and was losing fine motor skills.  She was aspirating into her lungs frequently, and she now needed a wheel chair. Sammy was still able to walk just not for long distances and had severe fatigue with any activity. Due to her ongoing fatigue which made it hard to eat, and her aspirations, we trialed a ng tube for almost a year and found that it help a lot so we decided to have Sam get a Gtube and start on feeds at home. This one thing made such a difference in her life and kept her out of the hospital. We could increase or decrease her feeds, depending on her needs and her fatigue level, and it helped with school so much. Sammy was also granted a Make a Wish trip to Disney world, which was so mulch fun and she was able to stay at Give Kids the World. It was a very special time for the whole family. 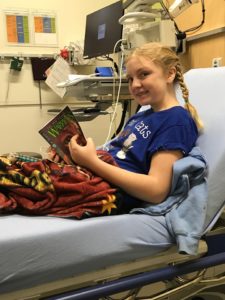 Sammy is 13 now, in 8th grade and did miss a lot of school this year with illness, but was able to obtain a strict A average and loves school. She wants to be an interior designer when she gets older, and now loves drawing and painting Anime, and League of Legends characters. She loves going to the special camps, and will be very sad that she will miss a year of camp because of the current situation in our country, but is hoping next year she will get to go, and meet up with all the wonderful camp friends she has made. For Sammy it’s a day to day situation, some days are great and some are just down right not so fun, but she always has a smile on her face, and takes her situation and doesn’t let it take her down.