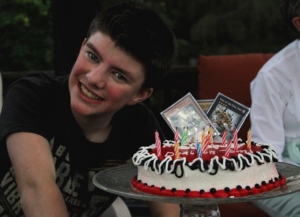 Tom was born in 2001 with the cord wrapped around his neck. Only days after leaving the hospital he was readmitted due to weight loss because he struggled to nurse and stay awake, and he had severe acid reflux. I had an older child, and I knew in my heart, something was not right. Since the beginning, we’ve experienced developmental delays. He didn’t sit up or crawl until months later and didn’t walk until he was 2. Tom was originally diagnosed with “Failure to Thrive” and we were sent to Seattle Children’s Hospital for a barrage of tests which led us to Dr. Russ Saneto and a muscle biopsy. Four long months later, we received our diagnosis – global mitochondrial cytopathy. We were relieved to know what we were dealing with, but no one knew at that point what was coming – many, many illnesses and issues stemming mainly from muscle weakness – bowel issues, trouble chewing and swallowing, eye weakness, lack of energy to attend school at times, a cleft pallet, more surgeries, and a mass behind his ear drum that resulted in major ear surgery to repair hearing loss.

Today, we face some of our toughest challenges – socialization & integration. He will be a 9th grader in Jr High this year. Only one more year before high school! He has a small group of ‘school friends’ that I pray he has the same lunch with!

Tom’s medical hurdles today are ADHD, mild Asperger’s, muscle weakness & sensory integration dysfunction. He’s going through a growth spurt as part of puberty which is taking a big strain on his body. All things we can manage. We continue to steer Tom in directions where we believe he will be successful and feel good about what he’s accomplished. He is currently into Yu-Gi-Oh! Japanese animé movies, and plays the drums in the school band.

We are constantly amazed by his amazingly positive spirit, imagination and enthusiasm for life!  Tom is a true blessing!