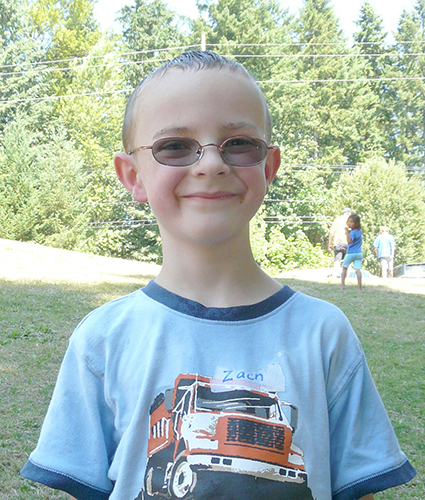 Zachary Coulthard was born on May 21, 2007 at 34 weeks by emergency C-section, due to heart rate decelerations in utero. Zachary spent 2 weeks in the NICU where he required oxygen, had feeding issues, reflux and bradycardia. After coming home Zachary cried constantly, didn’t tear, rarely slept, and continued to have feeding issues and slow weight gain. At four months he was sent to a developmental specialist due to his delays. Basic genetic testing showed nothing. At eighteen months Zachary had an Acute Life Threatening event (ALTE) and spent almost sixty days inpatient. During that stay, due to severe reflux, Zachary had a Nissen fundoplication performed, a G-tube placed so he could receive adequate nutrition and a pyloroplasty performed.

Zachary is an energetic seven year old that loves playing video games and doing gymnastics. Zachary is looking forward to starting second grade with his friends, but he faces far more challenges than his peers. Some of those challenges are more obvious, but many are invisible and need careful monitoring by those that care for him. That’s one of the things that make it so difficult to treat and care for someone with a mitochondrial disease.

Two years ago after moving cross-country, Zachary’s medical care was transferred to Dr. Saneto and his caring staff for continued treatment of his mitochondrial disease. We are thankful for all the hard work they put into applying advances to diagnosis and treatment for Zachary and others like him. The guild has welcomed our family with open arms. They provide opportunities for our family to meet other families like ours and to educate us about advances that are being made in mitochondrial research and medical treatment.